This is something that I have wanted to do for a long time. Very little in my life has ever inspired me, yet some stupid, over-the-top cartoon has somehow become the foundation of much of my mental wellbeing. It’s crazy to think about really but I know that I am not alone in my passion for the show. As such I intend to write out a series of discussions, each one analysing a different element of what I feel sets Gurren Lagann above most other shows. I invite you to come along with me and to leave your thought, stories and comments.

So for this first post I want to talk in broad terms about why I believe this show is able to affect people so strongly. I will be discussing spoilers so if you haven’t seen it then I wholeheartedly recommend that you watch it. There are 27 episodes but I say give it until the end of episode 8 before you write it off if you are not convinced before then.

Gurren Lagann is strange in that, what other meaningful shows might hide in subtitles, it shoves in your face as a brazen spectacle. Ironically though this can come across as more unnoticable than the former. You don’t expect depth with explosions and over-the-top shouting. I found myself becoming a sort of missionary for the show and tried to get everyone I knew to watch it. One such person seemed very uninterested and summed it up after a few episodes as “It’s just tits and explosions”. And you know what? I couldn’t really argue.

Gurren Lagann wears parody and going to extremes like a well tailored suit. It is designed to be a satire of anime as a whole and thrives off of exaggerated tropes. As such it is filled with gratuitous fanservice and action to the point that it really does come off as only “tits and explosions”. But this is also where it draws its strength. Gurren Lagann isn’t afraid of what it is. It embraces the passion and chaos and channels it straight into pathways of pure optimism and acceptance.

The story is a clique coming of age tale following a shy young boy in a world of violence and despair. The protagonist, Simon, follows the trope of depressed kid who reluctantly pilots a mecha to fight off a greater foe. He is scared of the world, lonely and has no sense of self worth and is written in such a way that, while he is not instantly a likeable character, he is relatable to everyone who has ever doubted themselves or had dark periods in their life. Then there is Kamina, the idealised older brother figure who is everything that Simon wants to be. He is strong, brave, good looking and everybody loves him. He encapsulated that which most people want to be with his abundant passion and charisma. Just like Simon, the audience latches onto Kamina as a source of motivation. 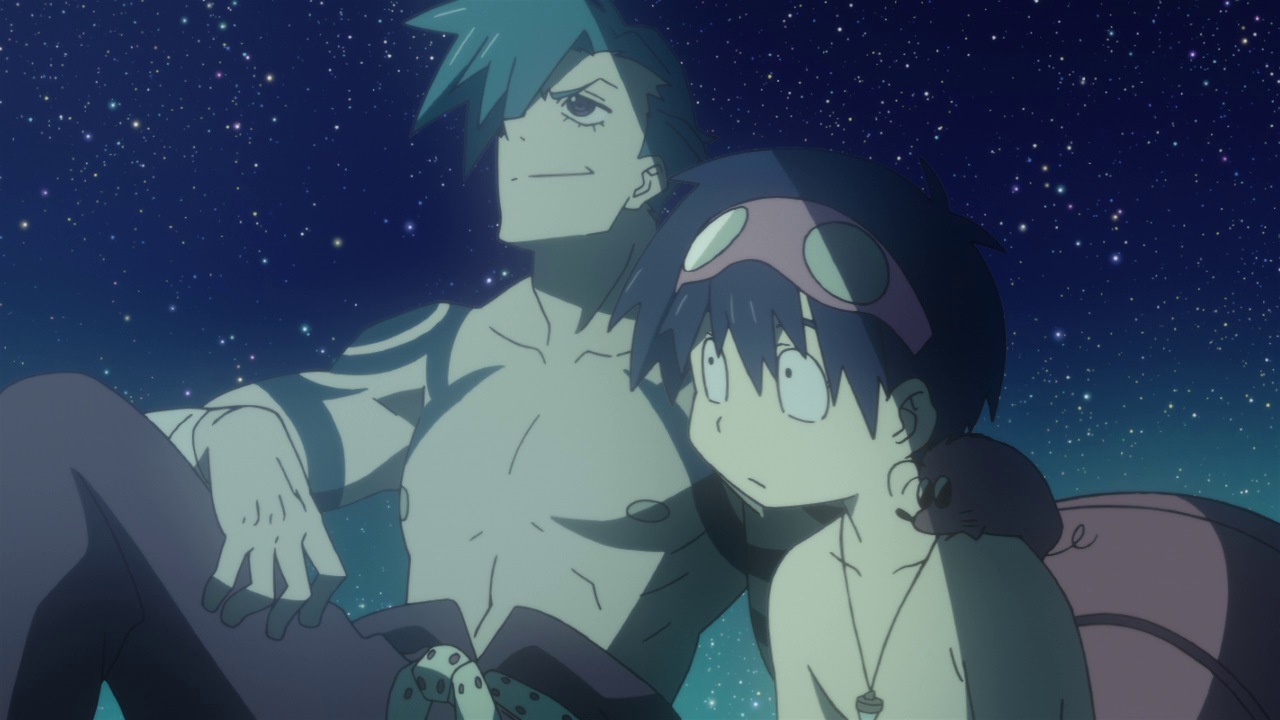 And that there is the crux of Gurren Lagann’s appeal. It is unadulterated motivation and optimism. The things that Kamina says are cheesy and often illogical but are said with such sincerity that you can’t help but to take them to heart. Lines like “Kick logic to the curb and do the impossible”, “Believe in the me who believes in you” and “A real man never dies, even if he’s killed” have no purpose beyond kicking the hearer’s ass into gear. Kamina’s role is that of a force of nature, taking Simon, and by proxy the audience, and pushing them up, forcing them onwards and boosting them through into tomorrow.

And then he is gone. Kamina is killed and you are left questioning everything. The goofy fun where the characters can pull victory from any situation is turned on its head and the remaining characters, and audience, are left without their driving force. Simon is left as a shell of himself and starts to fight for the wrong reasons. Just like in real life, something terrible and world changing has happened and he doesn’t know how to move past it.

From here though we see him grow. He can no longer rely on Kamina but the world still needs a person to fight for freedom. Simon finally realises everything that Kamina had been telling him and stops trying to be his bro and instead embraces himself. He becomes the man that Kamina always believed he could be and we are with him through this journey. We as an audience can grow and realise that we need to believe in ourselves. Yes, Kamina is dead but he isn’t gone. He went from the force that pushes us up to the firm foundation below our feet that keeps us safe as we ourselves push onwards.

Gurren Lagann is a story of human determination and the will to never give up. It is about moving past the person that we were yesterday. Every time the characters are knocked down they come back stronger. Bad things happen but they ultimately strengthen the resolve of those that survive. There is no bullshit politics, gimmicks or workarounds. The characters have a single aim and fight tooth and nail until they win. Defeat is never an option because it is a concept that they simply don’t acknowledge. Gurren Lagann makes you feel good because it makes you believe that anything is possible without limitations.

When you are depressed, sometimes a healthy dose of fighting spirit is the only thing that keeps you going. Gurren Lagann’s focus is having the will to survive and that is an important lesson when the whole world feels like it is against you. Sometimes you need a “Let’s see you grit your teeth” moment to make you stand up and face life head on with a roar of WHO THE HELL DO YOU THINK I AM!

(Next time on GLDC: Philosophy and Ideology in Gurren Lagann)